How was life in Leuven a century ago? Where did people meet up? Which was the most frequented shop? What games did kids play? While looking at photographs of the landmarks of Leuven, these are some of the questions that cross our minds. We want the photographs to speak to us and share their memories of past times. We not only want to see how the city used to look like, but we also want to know more about the city’s past inhabitants and their ways of living.

On Friday, November 27th the Europeana Space Photography Pilot coordinated by Professor Fred Truyen will host the “Photographic Memories Workshop” in collaboration with the Leuven City Archive. Seniors, students, citizens of Leuven and surrounding areas are invited: join us for a voyage in time, through the stories hidden in our photographic heritage and a Wet Collodion demonstration, and back to the present with the most modern digitization techniques.

We are looking for traces of this past and we need your help. If you hold photographs, negatives and even glass plates that show the past life in the streets, squares and market places of the city, bring them along to the workshop and tell us more about them. Top digitization specialist Bruno Vandermeulen will be there to digitize your photos using state-of-the-art technology, so have a USB stick* with you to bring back home the beautiful, high-quality, digitized versions of your photos. We only ask you to license the photographs as CC-BY-NC, which means that you allow us to reuse the photographs in a non-commercial context.

You will have the opportunity to get to know better the City Archive and its photographic collections.

At 14:00 professional photographer Frederik Van den Broeck will give a demonstration of the Wet Collodion technique and produce few tintypes and ambrotypes. The Wet Plate Collodion procedure is an early photographic process invented in 1851 by Frederick Scott Archer, and takes its name from the Collodion emulsion used to make the plates sensitive to light. The demonstration will be followed by the digitization of the newly-produced tintypes and ambrotypes by Bruno Vandermeulen: a way for us to connect and show you past photographic technologies and present ones.

Don’t miss the opportunity to witness the past and present of photography come together! 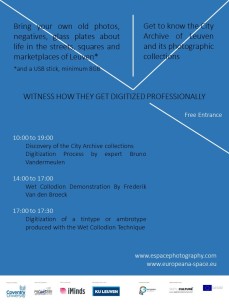 *recommended size: 8GB. Otherwise we can send you the file(s) via email.

Since Michel Foucault described how life as such became the object of political attention, planning and intervention – a phenomenon he called biopolitics – his theories have attracted a large amount of academic and non-academic interest. The  ideas Foucault developed later in his life have become much more accessible because of the recent publication and translation of his lectures at the Collège de France. Foucault argued that in the 19th century new developments in city planning, the design of institutions and health planning led to the fact that our daily existence, from our most intimate habits to our physical behavior, had become heavily regulated. The modern functioning of power – biopower, as Foucault called it – is to direct our lives in the smallest details, practices or choices. Foucault thus relocates the working of power from the law or the government to simple daily practices, such as the way we walk and talk, spaces we inhabit or the media we use on a daily basis. Such a biopolitics will always go along with increased (self-)disciplining and control. However, because of Foucault’s death, his views on biopolitics remain sparse and fragmented, but it is precisely because of this that many contemporary scholars feel the need to complement or develop Foucault’s valuable suggestions. Gilles Deleuze, for example, argued that the mechanisms Foucault described have become even more extreme and invasive in our times of complex networks and virtual technologies.

The Academische Stichting Leuven provides funding for what they call IdeaLabs: these are groups of doctoral and postdoctoral researchers from different departments and faculties who will organize research activities or public events around a cutting-edge topic. In December 2014, the proposal for an IdeaLab on “The Biopolitical Condition” was approved for a period of two years. This group consists of researchers from Cultural Studies, Literary Studies, Philosophy, Social Sciences and Art History and together we will study the impact of Foucault’s theories of biopolitics on important new scholarship in our research fields. The fact that researchers from different faculties are interested in this topic already shows how great and diverse the influence of Foucault’s theories of biopolitics is: from philosophy of medicine to disability studies, from contemporary political philosophy to sociological studies about the current situation of refugees, from gender studies to biopolitics as a topic in literature and the arts… Especially in contemporary critical theory, with influential scholars such as Giorgio Agamben or Antonio Negri, the notion of biopolitics has become increasingly important. A good selection of some of the most important theoretical texts about biopolitics has recently been published by Duke University Press, titled Biopolitics: a Reader, edited by Timothy Campbell and Adam Sitze.

During the next two years we will organize readings groups in which we discuss key texts and invite relevant speakers. Anyone who is interested in this topic can always join our reading group or come to our events!

For more information about the events of the IdeaLab: https://thebiopoliticalcondition.wordpress.com/

For more information about IdeaLabs and the Academische Stichting (in Dutch): https://www.kuleuven.be/asl/idealab/

Five researchers from several universities, working in different departments and on diverse topics, but all with a tremendous interest in Disability Studies, went to a cozy country house in a remote Belgian village. We would stay there for three days to do a ‘collective biography workshop’ under the supervision of the Australian scholar Bronwyn Davies. Prior to this three-day workshop, the group gathered weekly over the past two months for reading sessions. These reading sessions – which focused mainly on new materialism and included the writings of Karen Barad, Jane Bennett and Kelly Fritsch – would prepare us for the workshop. While reading and discussing the texts, it soon became clear that we wanted to work on disability as a practice and on how we could imagine disability differently. Therefore, we chose to start from Michel Foucault’s text on heterotopia, as well as from Kelly Fritsch’s article on Desiring Disability Differently. Nevertheless, whatever the plans and expectations may be, a ‘collective biography’ is not a practice you can fully delineate in advance.

Collective Biography, a post-qualitative research strategy and diffractive methodology developed mainly by Bronwyn Davies (1994; 2001; 2006), basically works with the telling and sharing of stories in which a theoretical concept is put to the fore. Participants in the collective biography workshop each tell a story based on an initial question or topic. It is not relevant if the story or memory is reliable or not, rather it is about creating knowledge about the construction of people and events. This research strategy assumes that knowledge not only emerge out of ‘data’ but out of the intra-action between the data and the researcher (Davies 2006).

As a methodology, collective biography is in the first place inspired by the German scholar Rigga Haug’s memory work. Memory-work contains the writing and subsequent analysis of remembered stories that researchers collectively use to generate their own critique of theory. In the wake of Haug’s memory strategies, Davies uses memories and stories to explore the processes of subjectification (Davies et al 2001). Davies methodology, however, differs from Haug’s memory work in the sense that Haug is concerned in working from the point of view of the individualized subject and is interested in ‘therapeutic outcomes’(Haug et al 1987), whereas Davies is not. Collective Biography works with post structural theory (mainly Foucault and Butler) and against the grain of phenomenology’s liberal-humanist subject. After all, the goal has nothing to do with any therapeutic outcomes, but instead is focused on generating thinking in order to know differently. It is important to understand that collective biography works not as a strict method to be followed; instead it could be interpreted as a set of emergent possibilities. In that sense, one could for instance see that during the last decade the methodology has evolved more and more towards what Davies calls a Deleuzian/Baradian approach.

In the three days we were together we began the workshop by talking about the concepts we might draw on to understand or imagine ‘disability differently’ (in this specific case we started from the concepts: heterotopia, intracorporeal, non-antropocentric multiplicity and animacy). Furthermore, in response to the concepts, each of us told a remembered story and was then questioned by the listeners who sometimes needed more details in order to fully enter the story. The listening, of course, takes us always beyond moralistic judgements:

Instead of sharing a memory, one of us chose to show her animation film, De code van Lode – which is still a work in progress.

The film is part of her auto-ethnographic research and tells the story of her brother’s unique and unusual language, as well as the many different interactions of the other family members with the brother. Ultimately, this showing instead of telling unexpectedly opened up new ways for us to work with the concept of animacy, heterotopic imagination and disability.

After the first telling/showing round, the following step was to write all the stories down and again reread them out loud to the group. Thus, it is a process of (re-)telling, (re-)listening and (re-)writing, it is a process of being modified through what one comes to know. At one point the stories – which were mostly about supporting or living in the presence of people with disabilities – were not individual memories anymore, but became collective stories that demonstrate how the concepts from which we started, work.

After circling around our stories as well as around concepts such as heterotopia, intracorporeal, non-antropocentric multiplicity and animacy, we will now write a co-authored article about imagining disability differently and disability as a practice.