Tourism is big business and “literary” travel guides are often marketed as culturally correct tools to upgrade the experience of the journey, be it abroad or at home. The new book by Eric Hazan (a publisher and political activist born in 1935 whose crisp and provocative ways of writing and thinking can be given as an example to many of those who are much younger than him) is not a book of this kind. A personal and often directly autobiographical expansion of his well-known social history of Paris (The Invention of Paris, translated by Verso in 2011), Une Traversée de Paris (“A Crossing of Paris”, a heavily connoted title which refers to the tradition of Situationist psychogeography as well as to a famous French movie on the black market during the German occupation) is, in the first place, a political book: a challenging contribution to the rich corpus of non-tourist books on Paris (other recent examples can be found in the work by Jean Rolin, Zones, 1997, which exists in a bilingual pocket edition, and Thomas Clerc, unfortunately not yet available in English). 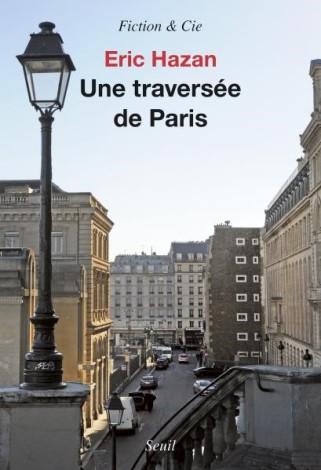 Hazan’s crossing of Paris leads him from the south (Ivry) to the north (Saint-Denis) and focuses on the “center” of Paris; that is, the twenty neighborhoods that can be found “inside” the beltway, which both prevents the traditional city to grow and protects it from the dangers of the less wealthy suburban circles that surround it (some French view Saint-Denis the way some Belgians view Molenbeek). Yet the margins are permanently present: geographically, humanly, culturally, politically speaking. The major aim of Hazan’s book is to disclose the “popular” aspects of the capital, which resist the galloping gentrification, and to highlight the continuity of a revolutionary tradition in the city.

Walking though Paris –and Hazan is a wonderful guide, a great observer, an excellent writer– is a very different experience from what tourist offices and their marketing spin doctors describe in countless brochures and reportages (all costs paid by the organizations that commission the writing, of course –and should it be repeated: literary slum tourism is an extremely popular, well paid and highly profitable part of this industry). The book is not at all an aggressive rebuttal of the tourist dream factory. It does what all great literature should do: make us aware of a different reality, and help us look better; that is, to really watch instead of just look around.