I first read about the work of the Observatório de Favelas in the great book Radical Cities by Justin McGuirk (Verso, 2014). This organization in the vast and sprawling favela Complexo da Maré in Rio De Janeiro was founded by the social geographer Jailson de Souza e Silva. Besides being a place for research about life in the favelas, the organization also houses the Escola Popular de Comunicação Crítica (ESPOCC). It has always been the dream of Jailson to start an alternative university in the favelas, in which educational programs would be combined with critical reflection about life there. Out of a personal interest in alternative education projects and curious to see how “critical theory” is put to use in a specific context, I decided to visit this place during my current stay in Rio. 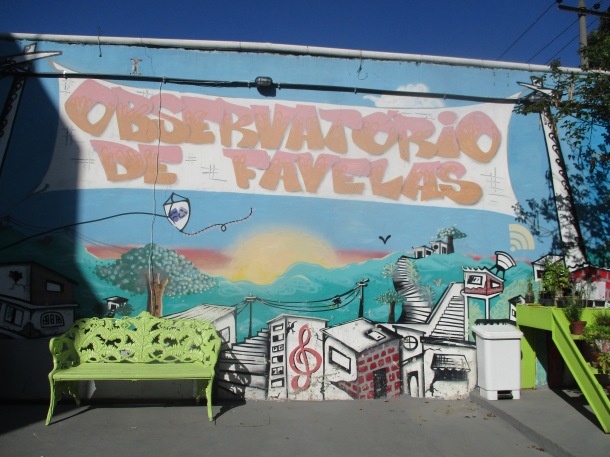 Various recent developments, however, have made visiting Complexo da Maré—a series of connected favelas that blended together over time—not so inviting. Maré is not one of those favelas that the city of Rio has attempted to turn into some kind of a tourist attraction. Recently, the violence in Maré has flared up once again. Two rivalling drug gangs fight to control the favela, with its inhabitants in the crossfire, and, making matters worse, the army has attempted to control the favela, which has added to the violence. During carnival, the fighting became so widespread that the highways near Maré, including the highway to the airport, were closed. It was precisely the violence of the army, causing casualties wherever they operate, that Marielle Franco denounced. Marielle was born in Complexo da Maré and made it to the Rio city council, where she continued her struggle for the people in the favelas. Last week, she was shot in downtown Rio. Her assassination strongly affected and shocked the people of Brazil. At the university where she was supposed to speak this week, a protest event was held. Murals with the slogan “Marielle presente” can be seen all over city. Even David Byrne dedicated the last song of his show in Rio to her. If I was not accompanied by a local friend who is familiar with the area, I would probably not have taken a bus to Maré.

Several photos of Marielle are hanging on the wall as we enter the Observatório. We are guided by Piê, who explains that the past week was very hectic for them with the murder of Marielle and the many protests that were organized in the wake of her death. Piê is a former student of the Escola Popular de Comunicação Crítica. Because of the fact that university education is relatively expensive in Brazil and the Temer government has implemented heavy cutbacks in academic funding and grants, university education is mostly out of reach for the inhabitants of Maré. The Observatório offers free courses that are part of two programs: one program teaching the students audiovisual skills and photography for the purposes of citizens’ journalism and another program in digital culture. The one-year programs lead to a degree that is acknowledged by the Universidade Federal do Rio de Janeiro. Some of the students have been able to adopt their skills in various cultural projects throughout the city. Because the classes take place in the Observatório, the students are also involved in the debates and research going on there concerning the conditions of the favelas, as well as the activism against the continuous violence experienced by the inhabitants and the so called “pacification” of the favelas. After several years of successfully running the program, Piê also acknowledges that recent political and economic developments have affected the funding of the organization, making it difficult to continue the educational programs at this time.

The day before this visit, I presented a paper at a large academic conference in Rio De Janeiro, partly organized by the Academia Brasileira De Filosofia. Probably as an overreaction to safety concerns in Rio, the conference was held inside the old military academy near the beach of Leme. The general absurdity and stuffy pompousness of this kind of academic conference, with posh receptions in the presence of the consuls of various countries and a dress code, was made all the more bizarre by the location. Entering the conference was only possible after showing one’s badge at an army checkpoint. Our PowerPoint presentations were even installed by uniformed soldiers. The usual dreary presentations were disrupted by the occasional blaring of an army trumpet. The contrast with the idealistic attempts of the people of the Observatório to offer academic education and critical theory to the inhabitants of Rio could not be bigger.