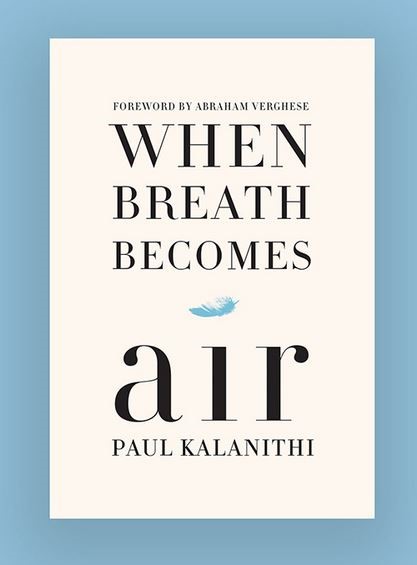 When Breath Becomes Air is a memoir written by Paul Kalanithi and published in January 2016. Educated in English literature, human biology, philosophy and medicine, specializing in neurosurgery, Kalanithi writes that he was always interested in learning about the “life of the mind” and particularly, what makes for a meaningful life – he rejected the personal pursuit of one’s own happiness as this end. The question of a meaningful life becomes all the more urgent, when, from the first page of the book’s forward – and the inside of the book’s jacket – the reader already finds out that the author of this book has died – in March 2015 – during the process of writing, and at the age of just 37. Diagnosed with advanced lung cancer in 2013, Kalanithi explains that this devastating news forced him to prioritize his personal values in the face of his immediately palpable finiteness. In this challenging situation, Kalanithi turned immediately to literature; finding solace in the language of poetry and philosophy, and pursuing the drive to write; in his youth, Kalanithi believed he would someday become a writer. Lucy Kalanithi brought the manuscript to publication this January after her husband’s death. She has written a beautiful epilogue to the book.

Kalanithi’s book is a weave of the personal ambition to cultivate a meaningful existence and to attain excellence in his chosen profession; a career that he saw as a “calling” rather than a “job” (69). Kalanithi writes that he “ha[d] started in this career [neurosurgery] to pursue death” (81): to understand its intersections with life and meaning. After completing a Master’s degree at Stanford in English literature, under the tutelage of renowned philosopher Richard Rorty, Kalanithi struggled between continuing on this path of literature and philosophy and the pull he felt to gain a deeper understanding of the life of the mind through practice (40). Kalanithi writes that he, “studied literature and philosophy to understand what makes life meaningful [and] studied neuroscience […] to understand how the brain could give rise to an organism capable of finding meaning in the world” (35). Before finding an answer in neuroscience, Kalanithi wondered: “where [do] biology, morality, literature, and philosophy intersect?” (41)

Interwoven in childhood stories and early adulthood experience are the tough choices that arise from negotiating the relationship between doctor, patient and families and how these relations changed with the shifting of his own identity from doctor to patient himself. Kalanithi explains that, more than the highly demanding technical skills of striving for perfection in the operating room, the task of the neurosurgeon is also that of crucially assisting patients and their families with existential questions. As a doctor, Kalanithi explains that: “when there’s no place for the scalpel, words are the surgeon’s only tool” (87). The importance of language as both a mediator of communication and yet, always already bound to a certain failure (a limitation) – as Alberto Manguel, describes in his recent book, Curiosity – is the thread that runs throughout Kalanithi’s book: striving for communication and meaning-making, alongside the humility of one’s own limitations.

Struggling with the difficult choices of prolonged suffering versus shortened lives with his patients, Kalanithi explains that sometimes he found himself working as “death’s ambassador” (87). In his description of working in the constant presence of death, Kalanithi displays his own affinity for language as he describes this experience as, at times, “palpable” like a “humid muggy day” wherein he felt “trapped in an endless jungle summer” (78). With an interest in life’s larger philosophical questions, Kalanithi did not turn away from death in his profession or personal life, as it became clear that his own time was shortened. In discussing his experience of time in illness, Kalanithi notes the paradoxes of wanting to hurriedly achieve all that one had hoped to in a life-time, and the reality of not having the energy to do so. The image he elucidates is that of a hare, he writes: “it is a tired hare now who races” (196). The mental image of this emerges in the reader’s mind as an illustration found in children’s books – eliciting, perhaps, familiarity and comfort – and yet, he who races forward is confined to slowness and bodily decay, complicating the innocent allusion to the tortoise and the hare.

In Lucy and Paul Kalanithi’s decision to have a child after his diagnosis – a little girl named Cady, to whom the book is lovingly dedicated – it was ultimately a decision to not let the fear of potential suffering define their lives. In an interview with CBC radio host, Shad Kabango, Lucy Kalanithi explains her late husband’s reaction to her worry that having a child might “make dying that much more difficult”: Lucy explains that Paul Kalanithi responded: “but wouldn’t it be great if it did?”, indicating that life, for Kalanithi, was about leaning into experience rather than avoiding suffering (February 2016). In his 2014 essay published in The New York Times, Kalanithi turns to Samuel Beckett and finds strength to continue in the writer’s words: “I can’t go on, I’ll go on”.

This book is at times a difficult read, it is also a joyful and humorous read. Most of all it is a confronting read that puts into stark light the values that we choose to live by every day and the hope we might find in the words: I’ll go on. It reminds the reader of the changing and malleable roles in life, and that indeed, as John Irving wrote in The World According to Garp: “we are all terminal cases”. The beauty of the book resides both in its hope, interwoven with despair, and the intersections between and across philosophy, literature, and the human sciences – Kalanithi describes with care the beautiful organ of the human brain and the confrontation between doctor and cadaver. The many questions that arise from this book include: what makes life worth living? what makes for a meaningful life? how might one pursue one’s own values in the face of one’s limited time? And how to balance a life of reflecting on these questions, with a life of practical living? These questions of course reflect the current debates on ‘dying well’, having a say in one’s own death, and maintaining dignity in these highly personal choices. The experience of navigating life and death as Kalanithi describes it – his experience – remains imprinted as a ghostly companion in the mind of the reader.