A reading suggestion for the summer: Traversals: The Use of Preservation for Early Electronic Writing by Stuart Moulthrop and Dene Grigar and with foreword by Joseph Tabbi, described as “An exercise in reclaiming electronic literary works on inaccessible platforms, examining four works as both artifacts and operations.”

Many pioneering works of electronic literature are now largely inaccessible because of changes in hardware, software, and platforms. The virtual disappearance of these works—created on floppy disks, in Apple’s defunct HyperCard, and on other early systems and platforms—not only puts important electronic literary work out of reach but also signals the fragility of most works of culture in the digital age. In response, Dene Grigar and Stuart Moulthrop have been working to document and preserve electronic literature, work that has culminated in the Pathfinders project and its series of “Traversals”—video and audio recordings of demonstrations performed on historically appropriate platforms, with participation and commentary by the authors of the works.

If you are still unconvinced, you should first read Jan Baetens’ review of the book. Quoting directly from the review:

The very classical, perhaps eternal, topic of the author speculating on, day-dreaming or boasting of the afterlife of her or his works, is something that the successive new media revolutions of the last decades are forcing us, as readers as well as writers, to reconsider in radical ways […] True, the loss of literary and other works is far from a new phenomenon (most works are almost immediately forgotten; many works are destroyed, by accident or on purpose; still others get simply lost), but the issue of their technical accessibility is becoming one of the major problems of our contemporary, electronic culture. […] If one decides that just moving ahead in order not to miss the next new thing and that just forgetting about the past is what matters, then technical obsolescence is not a problem. But if one believes instead that “we must struggle never to forget” (p. 237, last words of the text), then the situation becomes quite different (it should be reminded here that in cultural semiotics, as illustrated by the School of Tartu of Yuri Lotman, culture is defined as “non-hereditary memory”). The keyword of this book’s subtitle is therefore twofold: it is about preservation, but even more about the use of preservation, a way of saying that it should be read as a double warning: first, against the illusion of the very possibility of such an enterprise (nothing can be “really” preserved –– what is being preserved is always only a certain form or version of it); second, against the confusion between material conservation (which is a necessary step in the larger process but nothing more) and preservation in the broader sense of the word (which refers to the need of making meaning of the object of preservation, here and now but also in the future). 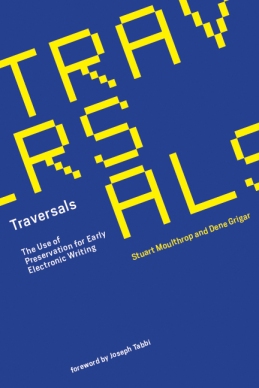 Traversals: The Use of Preservation for Early Electronic Writing

by Stuart Moulthrop and Dene Grigar; foreword by Joseph Tabbi

One thought on “Traversals: The Use of Preservation for Early Electronic Writing”