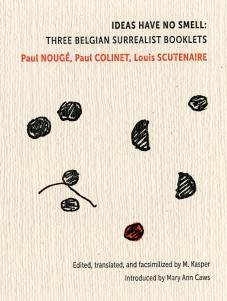 My apologies for the silly title of this review, which is the umpteenth variation on a worn-out cliché, but this time it perfectly does the job since the new book by Michael Kasper, a fascinating American book artist and essential middleman in the literary dialogue between Belgium and the US, is precisely anything but a translation. Like all great Renaissance artists, Kasper approaches translation as a comprehensive process, which entails careful editing, editorial comments, creative rethinking and rephrasing of well-crafted translations, and an exceptional commitment to typography, page layout, and book design.

Content-wise Kasper’s work offers the first English translation of three short essential Belgian Surrealist works: Transfigured Publicity, by Paul Nougé; Abstractive Treatise on Obeuse by Paul Colinet; and For Balthazar, by Louis Scutenaire, which gives an excellent overview of both the diversity and the unison of Belgian Surrealism, as committed and transgressive as its better-known French counterpart, but much less concerned by questions of the occult and the unconscious.

The combination of the words “short” and “essential” is no oxymoron: Modernity has a preference for short forms, and Surrealism, certainly in the case of Belgian Surrealism, tends to favor the (shock) effect of the text, which does not leave room for lengthy and distracting developments. The aphorism, the short poem and the appropriated publicity slogan but also the estranging title of an apparently academic painting are thus among the preferred formats of the Surrealists, helping them to turn their texts into real arms.

As a printed object, Ideas Have No Smell adopts a form that perfectly fits this strategy. The facsimile version of the original publications (some of them handwritten) gives a good idea of the DIY philosophy of most Surrealist publications (an author like Nougé tended to reject publication at all) and highlights the identity of nonmainstream writing formats and radical messages. Moreover, the small size of the booklets and the folded poster with a reproduction 1926 handwritten sign of Nougé’s visual poems and the introduction by Mary Ann Caws offers a playful and clever example of the interaction between the part and the whole, that is between the whole that refuses to be a closed unity (the box is “open” and contains various heterogeneous items, exactly as in the Duchamp boxes) and a series of parts that each try to become a world in themselves.

Surrealism has suffered a lot from its recuperation by the cultural establishment. In many cases, it appears as silly and stereotyped as the Impressionist paintings that used to appear on the annual calendar of the postal services. Ideas Have No Smell: Three Belgian Surrealist Booklets is the perfect opportunity to question the limits of this recuperation and to (re)discover a literary and political movement that is far from having lost its relevance.