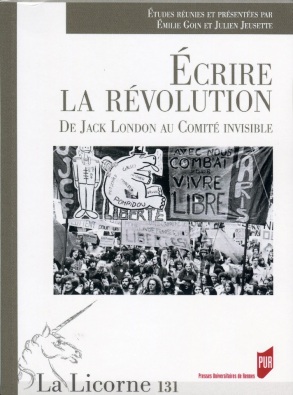 History did not end after the collapse of the Berlin Wall in 1989 and since 9/11 many new forms of historical consciousness as well as experiencing time and history have emerged, sometimes rather slowly, in the wake of theoretical efforts to restore the focus on our ever changing world, but occasionally also very abruptly and unexpectedly. In this new historical paradigm, the notion of “revolution”, that is the radical event, often unplanned or unforeseen, that suddenly breaks the continuous chain of moments, situations, contexts and frameworks, has achieved once again a central position –next to, for instance, the apocalyptic stance of much ecocriticism or the ongoing nihilism of no future movements.

Well-known and much appreciated for its thematic issues on all aspects of literary studies, the French journal La Licorne presents an excellent overview of the ongoing debates. It takes as its starting points the two perspectives on revolution that have been defended by respectively Jacques Rancière (“how to prepare as well as produce a revolution?”) and Slavoj Žižek (“what to do once the revolution is there?”). However, this double question is not addressed in abstract or general terms. The 246 pages volume edited by Émilie Goin and Julien Jeusette opens with an excellent discussion of what is at stake in the recent return of the revolutionary sensibility and its interactions with a wide range of social transformations and dismays and ends with three interviews of key agents in the field (Nathalie Quintane, Ana Bertina, and Leslie Kaplan –a selection that crosses media as well as generations). Yet the central part of the book is made of excellent close readings of works and authors that illustrate the various and more than once contradictory meanings of revolution as a concept but in the very first place as a practice, be it a real one or an imaginary or utopian one.

Although the French Revolution and its afterlife continues of course to remain at the very heart of any reflection on the idea of revolution, and not only in France, and although the interpretation of this Revolution is currently once again more leaning toward the extreme left version of it, this collection of essays has the great merit of including a certain number of themes and topics that provide us with a much wider angle. Next to excellent readings of, for instance, the revolutionary rhetoric of “Le Comité invisible”, the collective pseudonym of a group of authors calling for an actual revolution, and inspiring interpretations of texts on May 68, the issue contains meticulous interpretations of works that are less easy to pigeonhole on the ideological spectrum, such as for instance Döblin’s unsentimental novelistic report on the failure of the German revolution in 1918 or Antoine Volodine’s postapocalyptic prose. In addition, it also tackles works and authors that are clearly anti-revolutionary, such as for instance the French writers who travelled to Germany in the Nazi period, before and during the war, in order to study and praise what they considered a necessary counter-revolution, or the nowadays forgotten novel by Paul Nothomb, Un délire logique (“A Logical Madness”), in which the author tries to justify the betrayal of his World War Two resistant friends.

In conclusion: an important collection, not only for its intrinsic scholarly qualities and the great diversity of themes and angles, but also for its courage to foreground the importance of writing and literature. Revolution may be made by ideas, but to perform it, one still needs words, and those made by writers are vital in this regard.