The iconic image from Funny Face (dir. Stanley Donen, 1957), one of the films for which Audrey Hepburn is best known, is the extreme close-up of her facial features—her brows, eyes, nostrils and lips. It is an image that Fred Astaire’s character creates in a dark room in an attempt to convince Hepburn’s character to become a model. He serenades her: “I love your funny face…!” 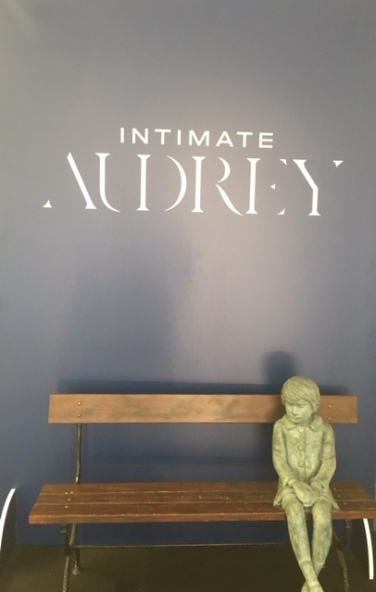 Large black and white images of the actor’s face greet the visitor of Intimate Audrey as they turn a corner and enter the first exhibition space: a low-lit black-box theatre type setting with a life-sized cut out of Audrey at the far end of the room. As the exhibition’s website explains, Intimate Audrey is a “‘bespoke’ exhibition of the life of Audrey Hepburn created by her son, Sean Hepburn Ferrer, to celebrate her 90th birthday anniversary in her birth town of Brussels, Belgium.”[1]

The feeling of intimacy, established in the first room (in which one also hears Audrey’s voice), does not diminish, but changes, upon entering a larger, more classical exhibition space with numerous photographs arranged in groups across the walls. In what appears to be Audrey’s scrolled handwriting, one can make out “my father Anthony” and “my mother Ella” below mounted clustered framed photographs.[2] If at first odd—to peer closely at photograph after photograph of strangers, sometimes with very little context or description—one quickly settles into what becomes the joy of following the ordinary moments of a life, which is also the extraordinary life of Audrey. Intimacy is tinged with strangeness as this life is both familiar and yet not, in any way, ours. The reminiscing one feels—“Ah, there’s Audrey in the movies!”—blurs with an impossible, though somehow imagined, recognition. We follow Audrey as a young person, in her early career, on her wedding day, as her son is christened; we time travel to where we have never been and see her in these different roles (daughter, actor, wife, mother, friend, muse, and, both throughout the various photographs and in some particularly striking ones, as a radiantly expressive individual). Somewhere between her ballet photos and sudden hair-change in the 60’s, we realize we are temporarily living in a large-scale family album/memory box of Audrey’s life.

While the downstairs section of the exhibition acts as an introduction to Audrey’s early life: her family, her drawings and books, her love of ballet, and her first acting experiences, the second floor displays memorabilia from her films and personal life: her marriage to actor/director/producer, Mel Ferrer, the birth of her first son, Sean, testimonials of her close friends including Hubert de Givenchy, and her work with UNICEF.

The most striking aspect of the exhibition, other than the beauty and the fashion, which we know and love, does not come as a surprise but is beautifully affirmed through still and moving images; that is, Audrey’s radiant joy and care. Across the many images, Audrey beams: she dances, jumps and poses—with flowers, hats, dogs and deer. She holds her sons close, gazes tenderly into the eyes of loved ones, holds hands with her best friend, and kisses the hands of those she traveled far to meet and for whom she advocated.

It seems a difficult task to create an exhibition around the style icon and one of Hollywood’s greatest stars when one is hard-pressed to find an interior of any space devoid of an Audrey reference. The visitor of Intimate Audrey may not learn something new (her love of flowers and her doubts about her appearance and acting skills have been covered in interviews and in her son’s book, Audrey Hepburn, An Elegant Spirit: A Son Remembers (Atria Books, 2003)), but Intimate Audrey is not about new discoveries. It is rather, as its descriptions states, a celebration of one particular life: both ordinary and extraordinary. Intimate Audrey is not a retrospective of a well-known career but an invitation to get a glimpse of a full life (in the always fragmentary way that this is possible): one of personality, youth, love, family and friendship, career and public work.

In line with the idea of this exhibition, there were two important curatorial choices that made Intimate Audrey work. The first is the exhibition’s prohibition of picture-taking: one has to look in order to see (the only photo-op permitted is in front of an exhibition poster and a statue of Audrey). This means that the images cannot be collected as mementos after a visit to the exhibition. The second decision involves an original take on the exhibition catalogue. This delightful surprise offers an elegant and interesting solution to an exhibition that seeks to offer a temporary peek into a life; a well-balanced testimony to Audrey, the woman.

[2] Thanks to Stephanie Florizoone for pointing out that the scrolled writing framing clustered photographs seems to match Audrey’s handwriting in her displayed UNICEF speeches. This is not confirmed.