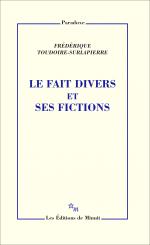 There is no real English translation for the French word « fait divers », which refers to the smaller news items, often purely anecdotal and without any special interest –except for the  public that has always devoured them (another French term is “les chiens écrasés”, the crushed dogs being also the traffic victims, of course). These news briefs often have a strongly melodramatic or sensational content (celebs’ divorces, kidnappings, bank robberies, murders) and their ubiquity is generally condemned as a symptom of depoliticizing and streamlining of a mind-numbed audience.

The book by Frédérique Toudoire-Surlapierre questions these prejudices, not by rereading the news brief from a new perspective, but by examining what happens –not in the text but in the mind of the readers– when serious literature takes such news items as its starting point. This general interrogation emerges in a special context, that of the alleged fading-out of literature as a socially relevant cultural practice (why go on reading literature?) and that of the book as a living host medium (why read texts in print if there are screens?). That contemporary literature frequently turns toward the “fait divers” could be seen as a an attempt to reestablish a dialogue with the audience, no longer interested in literature but still fascinated by the news brief. But this is not at all the author’s purpose, who claims instead that the merger of serious literature (be it fictional, autofictional or nonfictional) and the “fait divers” tells us something vital on the present status of literary writing, while also highlighting a key function that no other type of cultural practice can accomplish better than literary texts. On the one hand, the spread of “news literature” demonstrates a shift in the relationship between literature and social commitment: writers are no longer “engagés” (engaged, devoted to a specific cause and putting their texts at the service of this cause; today, this would be considered mere propaganda), but “impliqués” (which does not mean “implicated”, but “involved”, being part of what one is describing or commenting and doing it in a sense that goes with certain obligations). On the other hand, if literature does not change the content matter of the news item, it invites –and in many cases encourages, if not forces– the reader to change his or her mind, since its special take on the news brief confronts the audience with a case of “cognitive dissonance” (Leon Festinger), in other words a way of thinking that diverges from the public opinion. Contrary to other forms of social communication, literature has the right, and perhaps also the duty, to go against the grain and to challenge the doxa or general beliefs, often in shocking and scandalizing ways.

Using a variegated corpus of crime-based news items as rewritten in modern and contemporary literary texts (from Proust to Duras, from Genet to Giono, from Foucault to Bon, among many others), Le Fait divers et ses fictions offers a convincing demonstration of its double basic claim: first, the reinvention of literature as a socially relevant practice in an era of information overload and screen culture; second, the special link between literature and the more general issue of social belief and common opinions as well as the critical role of literature in the mechanisms that make us question the apparently unquestionable.