The Bibliotheca Wittockiana is the museum of book arts and bookbinding in Brussels. Besides maintaining a prestigious collection of both historical and contemporary books (and having a weirdly large number of baby rattles), they also host a few temporary exhibitions each year. From September 19th until January 20th, the artist Olivier Deprez (Binche, 1966) presented his project WREK in the exhibition WREK NOT WORK, curated by Géraldine David and Jan Baetens.

Deprez is an engraver and thus shows his woodcuts, also known as xylographs, in the Wittockiana. However, sharing his sources of inspiration and creative processes seems to be just as important to him. Central in the very impressive scenography of the exhibition stands a booth with a small printing press, as well as chisels and a stack of drawing plates. Manual labour truly is key in the lengthy process of wood engraving, making Deprez both artist and artisan. In a way, the materiality of wood engraving and printing is a focus point throughout the exhibition. The technique does not only go way back to ancient eastern Asia, but is also recognised in the work of – among many others – Albrecht Dürer, Frans Masereel, Lynd Ward and movements such as French Japonism and German expressionism. Still, the technique of wood engraving has been seriously underrated throughout traditional art history.

The title of the exhibition entails more than just an anagram of werk (work). Through the technical aspects and materiality of Deprez’ oeuvre, the viewer is invited to dive into the imaginary wold of the artist. His woodcuts represent storytelling, remixing and recycling. Deprez himself is the first one to acknowledge his rich visual archive of inspirational sources: literature, video, animation and comics have received a prominent place in the exhibition.

These influences are also clear in his artworks, where artists, authors and characters within a wide spectrum show up, from Malevich and Tatlin, to Beckett and Kafka, to Donald Duck and Nancy. Other artworks are based on stills from the digital age, such as YouTube videos and other captures of social media. Reinterpretations of these result in woodcuts that examine consumer society via parody and satire. Thus the almost obligatory question concerning intellectual property and authorship is also touched upon. And: what is the role of artists within this debate? The exhibition is not a random selection of works, but a well though-out unity that tells a story about the engagement of an artist in the twenty-first century.

The exhibition has already closed, but you can still check out the amazing catalogue. It consists of three booklets: a first one contains an interview with Deprez and a second one presents a selection of woodcuts from the project WREK. The third one, NOISE, shows some of the joint works of Deprez and Adolpho Avril, artist in residence of the creative atelier La “S”, the two previously collaborated on the book Après la Mort, après la vie.

At the moment, we can already start looking forward to the book version of the project, WREK: les indigènes de l’abstraction. Later this year, it will be published by FRMK. For more information about Olivier Deprez and the exhibition, please check out http://www.olivierdeprez.info/ and https://wittockiana.org/. 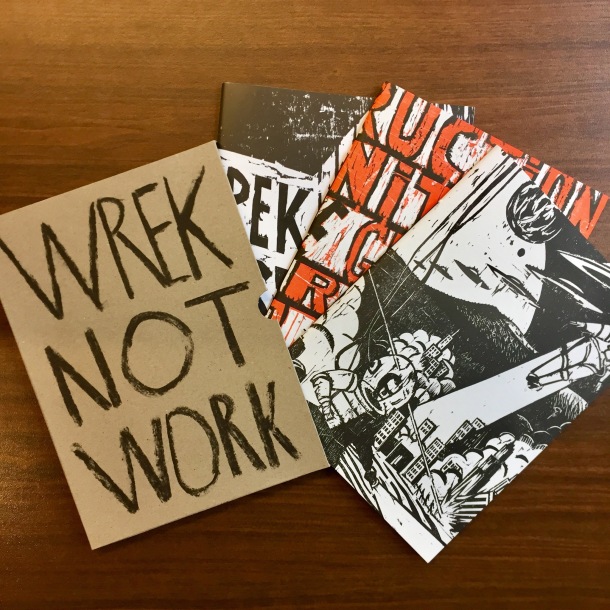