You’ll find all the answers in the exhibition “Transatlantic Modernisms” in which Cultural Studies Master students Sophie Baert, Anna Laganovska, Joachim Meeusen, Dahai Zhang and Catherine Zubkow participated as part of the course ‘Cultural Policy’. We are a multi-lingual, multi-national group of students from very different backgrounds, each with a unique perspective and strength to bring to the project.

Our project is part of the upcoming exhibition hosted by the Mu.Zee in Ostende that is about the artistic relationships between Belgium and Argentina between 1910 and 1958. “Modernism exists only within western and Eurocentric frameworks of thought”, but by following the connections, influences and exchanges of three key figures from both Argentina and Belgium during this time, the exhibition seeks to explore alternative histories in the trajectory of Modernism on a global scale.

The exhibition is built around three figures: the artist, the critic and the collector, as they are the personifications of the transatlantic relations and serve as the through-line of the exhibition. Victor Delhez was an artist from Antwerp who moved to Argentina at the end of 1925 where he continued to work and paint until his death. The art critic, Julio Payro, was an Argentine who spent his youth in Brussels where he made friendships with influential Belgian artists such as Paul Delvaux, which he maintained even after his return to Argentina. Finally, you have Ignacio Pirovano, an art collector and benefactor who maintained an intense friendship with Georges Vantongerloo, a successful Belgian artist. It was Pirovano who exhibited Vantongerloo’s art in Argentina and thus contributed to the overseas fame of this artist.  Thus, we decided to film a short video to introduce this fascinating relationship between artists from Belgium and Argentina.

The exhibition, which will be held at the Mu.Zee in Ostende, is scheduled to take place from February 20th to June 13th 2021. Please, follow the link to the museum’s website for more information about the exhibition: 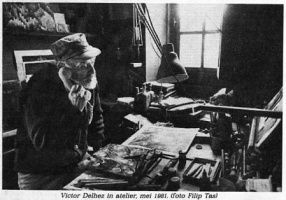