There are countless books on “how to write”, and the number of topics they cover, the types of audiences they cater to, the dreams and ambitions they may help or fail to realize, the styles they use, the tricks of the trade they offer (for free or for sale), the profiles of authors that take the risk of giving advice to future competitors, is even bigger. It should therefore not come as a surprise that many colleagues in cultural studies have taken the literary advice business–hovering between vocational training and personal development and many other things in-between or beyond these two extremes–as one of their favorite study topics. 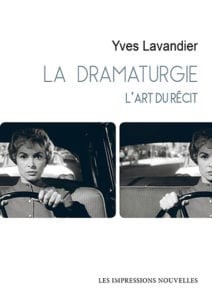 Their job will become easier and I guess also more exciting thanks to the new edition of what is considered the screenwriter’s bible, the one and only that actually deserves this title: Yves Lavandier’s Dramaturgy, a seven hundred (large) page book that revisits the fundamentals of storytelling as defined by Aristotle in his Poetics, and that rethinks, enlarges, deepens, and illustrates them with examples of contemporary narrative from different media (theater, cinema, comics, television, fantasy, etc.).

Trained at Columbia University by František Daniel, Stefan Sharff and Milos Forman, Yves Lavandier is both author and script doctor, and his book is a brilliant synthesis of this twofold life-long experience. Of all the (yes, countless) books on scriptwriting and storytelling and how to do it, this is by far the best one I know of, and frankly the only one I have on my desk when asking questions about the relative qualities and problems of specific plot structures. Lavandier does not pretend to reinvent narrative theory; his major aim is to help writers, professional as well as non-professional ones, to solve the many questions that emerge when one tries to tell a good story. He does so by emphasizing the fundamental role of general, classic laws, often forgotten or discarded, and by illustrating them in an extremely original way.

Rather than exclusively focusing on positive examples, such as the inevitable: this is how Hitchcock shows the superiority of suspense on surprise, he also gives negative examples, highlighting what can go wrong when one forgets the basic rules of the game. These examples all are extremely convincing for three reasons: 1) they are all motivated by a larger theoretical framework (Aristotle’s poetics), 2) their number is close to infinite: almost every page of the book discusses various examples, 3) they also concern masterpieces and great authors: Lavandier is not afraid of drawing our attention to what goes wrong in this or that scene of, for instance, Lubitsch’s To Be or Not To Be (which is also praised as an example of nearly perfect dramaturgy), what could have been improved in this or that sequence by Hitchcock or Spielberg, or which detail or plot element should have been removed, modified, or simply used differently by Truffaut, Brecht or Chaplin.

Lavandier’s Dramaturgy is not a must-read: it is a must-use, for starting as well as for experienced writers. One of the many lessons one can learn from it, is that storytelling remains both very simple and highly mysterious. Anybody can do it, at any time, and anybody can always enjoy improving, provided one accepts to critically judge one’s own achievements.